Meteorologists call them “mammary clouds” – nebulous, celestial udders that portend looming change. So called for their resemblance to breasts, a gang of these big-bosomed ladies thundered into town late this afternoon like roller-derby queens, hip-checking the last remnants of summer and letting everybody know who was boss. With the dog days out of play, fifty shades of gray heavens and a notable chill followed. 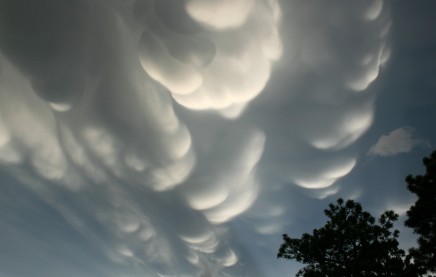 The clouds didn’t really look like breasts to me, at least not the pair I know best, so the moniker seems ill fitting. No, they resembled a sea – the underside of one. The clouds’ crests and troughs undulated in billowing mounds, like waves suspended in the sky, pearly gray, and brushed in a soft, matte finish. It seemed an entire ocean had ascended into the firmament.

The lyrics of a song from the 70s came to mind:

Of course, the lyricists were probably stoned and experiencing a hallucinogenic event, but it’s a wondrous, cerebral concept to consider.

I’m not the first person to look to the heavens for inspiration. Ancient peoples worshiped celestial bodies – sun, moon, stars – dancing in goat leggings and sacrificing their children in rapturous praise. And, although clouds figured prominently in many religious stories, with spiritual beings appearing in vapors and such, nobody, it seems, worshiped the nebulous mists. Too flighty, too unpredictable, too risky? Perhaps that’s why I like clouds so much. They seem to suffer from a sort of atmospheric ADHD. Never a dull moment with clouds, I say.

As the afternoon waned, I marked the passing of time by the clouds’ changing hues and roiling shapes, subtly back-lit by a heavily veiled sun. But true to form, the heavenly tide began to turn by evening, and when I searched the skies this morning, my sea of clouds was gone, leaving behind a cliché blue sky.

This blog is dedicated to my grandmother – “Granny” – with whom I used to cloud gaze.